By Jose B. Rivera 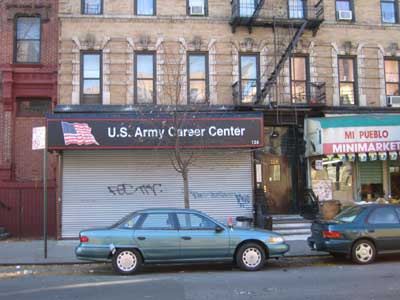 East Harlem - November 11, 2005.  On this great day celebrating those who have served this country to give us the freedom we have, East Harlem activists are gearing up to protest the opening of an army recruiting center at 122 East 103rd Street between Lexington and Park Avenues,in front of the Ortiz Funeral Parlor. Here we go again, another knee-jerk reaction by liberals to something which is not only good, but necessary.  It’s amazing that anyone would protest a recruitment center in our community.  Harlem has one and no one is protesting over there! And we are no longer in the 60s (nostalgic protest?)

Typical liberal thinking will revolve around how the military is bad (evil even!)or how we should not feed our young to be used in President Bushes adventures over seas! Imagine if the military never recruited in low income communities.  Then the very same protesters would be shouting about how we are shunned from serving.  Believe it, it would happen.

What Have You Done For This Country?
It’s amazing how all those doing the protesting have never once put their life on the line for their fellow citizens.  It’s far easier to complain than to be one of those who protects that very right.

Fairy Landers
Of course anti-military folks live in a fairy tale land, where unilateral disarmament and getting rid of one’s military would make the world “safe”. They believe that the military is “bad” or “evil” and that the world would be a better place without the military. Those beliefs are foolishness.  Without a military, someone else’s military would walk in and take over.  Without a military, gangs would run the cities.  And without the military, we would not be enjoying the freedom to protest.  It is strange that people would protest that which guarantees their very rights.

Yes, the world will be a better place without the military, but not before Jesus returns, so let’s not fool ourselves into thinking that man is good. Man is not as we are a fallen race, imperfect.  We can not trust that others will not take advantage of a defenseless nation and not try to take it, hence the need of a strong military.  Did September 11, not wake everyone up?

An Army recruiting career center is not a bad thing. Sure it is nostalgic to be anti-military but it is nonsense to think of not having a military. You can’t have an American lifestyle, enjoy its rights and then bitch about the military. It’s the very military which ensures that your rights are protected. You can’t have it both ways. It’s like saying you love the food in a restaurant but refuse to pay.

What The Military Did For Me
As a former military (U.S. Navy) person I can tell you that the best defense is a strong offense. And for those who don’t like the military, why not get rid of the local police while you are at it? Is is not the same thing?

The military gave me the opportunity to be employed and trained at a time in the late 70s. I have previously done some “community activism” for several years for local politicians and had nothing to show for it. After going to several of them for an entry level job and after finding that they had nothing to offer but more free work for them, I joined the Navy.

You know I would not mind local activist screaming and yelling about the Army Career Center so much if I did not know that most don’t ever create anything. They protest (which is sometimes necessary), and try to keep things from happening, but rarely do they create anything. 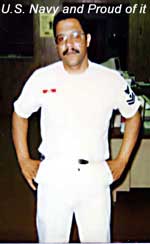 Reminds me of the National Organization for Women during the Clinton Lewinsky scandal. Instead of being up in arms because Pres. Clinton had abused his authority as a supervisor over an intern, they remained quite. Not what they did with Sen. Packwood. I agree that what Sen. Packwood did was wrong and that he was rightfully removed from office, but so should have Pres. Clinton. This episode taught me a valuable lesson. That politics is not about morality. N.O.W. lost all credibility with me. As have most knee-jerk liberals whose stance on an issue depends on who is involved.

East Harlem activist need to start creating change and not just stopping it from happening. What ever happened to the Ralph Flores’ of the community?

Note:
The writer of this article served on active duty in the U.S. Navy from 1979 to 1988.  As have three of his Uncles, his twin brother and a few cousins.  The Rivera family has never run from its responsibility to serve this nation.  And are proud of our service to it. Cowardice does not run in our family.