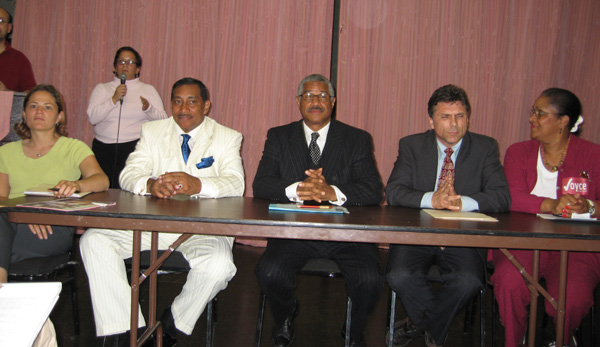 Story by Leon Tulton
Democratic candidates vying to be the next representative of the 8th City Council District gathered at a forum August 16, 2005 to discuss how each would address the interest of the immigrant community if they were elected to the coveted position.  Addressing the mostly Latino audience, the candidates, who are Nelson Denis, Joyce Johnson, Felipe Luciano, and John Ruiz, answered the questions of the moderator and residents about concerns ranging from immigrant street vendors being harassed by the police to access to affordable housing.  The common themes that the candidates stated were helping undocumented immigrants to integrate into the larger community, improving the local schools, and creating more affordable housing for life-long residents.

Denis, founder and director of a free community legal clinic and former state assemblyman, argued that he would fight for the immigrant community’s right to vote in municipal elections.  He stated that many residents, who are undocumented, lack voter representation and the power to vote would make elected officials accountable to their needs.  “There’s no reason why any immigrant who works, pays taxes, pays rent, and has kids in our public schools should not be entitled to vote in the municipal election regardless of citizenship,” Denis said.  “This is a nation of immigrants” It’s un-American.”

Johnson, director of operations of a Bronx charter school and former executive director to former-New York City School Chancellor Rudy Crew, explained that she would utilize immigrant coalitions in the community to act as a liaison between herself and the immigrant community.  “Much of the immigrant community has fear [of approaching elected officials about their concerns],” she stated.  Johnson cited how many immigrants are exploited by unscrupulous employers (i.e. being denied health benefits or paid below the federal minimum wage) and are afraid to tell their stories of abuse for fear of being reported to immigration officials.  “I’m going to [go to] them neighbor to neighbor to say “What are your problems, what are your needs and how can I help because I’m here to serve the community.”

Luciano, a former broadcast journalist and former co-founder of the Young Lords Party, the Latino equivalent of the Black Panther Party, argued that he would use his position as a councilmember to insure that immigrants will be able to sell their products on the street without being harassed by the police.  According to Luciano, he explained that earlier immigrants, such as Italians and Greeks, made a living by selling their products on the streets like today’s group of immigrants.  He added that the descendants of the earlier immigrant groups have suffered from “cultural amnesia” and now are treating the new generation of immigrants as their ancestors were treated.  “They are picked up, their [products] are thrashed, they are ignored and discriminated [by the police],” Luciano explained.  “Those are the things that I want to rectify because they [Latinos] are the next group [of immigrants].”

Ruiz, a retired New York City firefighter and Democratic District Leader, also reiterated the problem of immigrant street merchants being harassed by the police due to their undocumented status.  “I think that the desire of every immigrant who comes to East Harlem is to be documented and become a U.S. citizen,” he said.  “They want the right to an American life.”  Ruiz stated that he would as councilmember expand the work that his organization does in helping immigrants obtain a individual taxpayer identification number (ITIN) that allows them to pay taxes without a social security number.  He argued that immigrants with a ITIN applying for legal status or U.S. citizenship are perceived more favorably by the U.S. government because they are contributing revenue.

Regarding the issue of education, the candidates agreed that the quality needed improvement and each stated their own reasons why local schools have failed the community’s children and ways to remedy the problem.  “The schools have historically been failing schools,”  Johnson described the declining quality of the community’s learning institutions.  She stated that a good-quality education is a key component for residents to improve their lives.  Denis explained that he would pressure City Hall to demand from the state the money awarded to the city from a 2003 state court of appeal decision that ruled that the state must spend an additional $4 billion on the city’s public school children.  “More than half of our population does not have a high school diploma,” Denis said.  He explained that factors such as family and work obligation may force a person to drop out of school.  Denis proposed that he would expand the use of neighborhood schools for evening and adult education programs such as computer literacy and G.E.D classes.  Both Luciano and Ruiz argued that they would add vocational training courses to local schools as alternatives to academic classes.  Luciano added that he would also advocate for more certified teachers and the inclusion of history reflecting the countries of immigrant students as part of the academic curriculum.  “We need an educational system that is diverse,” he stated.

All the candidates also agreed that affordable housing is an important issue that affects both immigrant and non-immigrant residents in the district.  The contenders stated that many of the housing in the community, especially new apartments being developed, do not follow the 80/20 housing formula that requires 20 percent of the units in a residential building be affordable to low-income tenants earning no more than 50 percent of area’s median income.  “There’s a tremendous over development of inaccessible and unaffordable housing,” Denis charged.  “There should be no more than 25 percent of your income [going to rent.]”  He stated that part of the problem that contributes to a shortage of affordable housing is when landlords don’t release (a.k.a. “warehousing”) affordable apartments that were vacated until the housing market increases.  Denis said that he would create an “anti-warehouse” bill that would prevent landlords from holding out on apartments when affording housing is needed.  He added that he would advocate for the establishment of regional landlord-tenant courts in the community where tenants being displaced and who don’t have access to the legal system can go to resolve housing issues without leaving the area.  Johnson and Ruiz argued that they would push for the preservation and additional development of Mitchell-Lama housing.  Both claim that the Mitchell-Lama housing will allow young professionals who want to stay in the community to raise their families without being priced out.  Ruiz also suggested that he would advocate for the 80/20 housing formula to be revised.  According to Ruiz, he proposed a 50/25/25 formula that would allot 50 percent of the housing units to market value prices while the remaining two 25 percent will be dedicated to middle class and low-income families.

Luciano explained that he would use the councilmember position as a bully pulpit to argue for the elimination of the Urstadt Law, a state law that removed the decision-making power about rent regulation from the city government in 1971.  “We need to bring “home rule” back to New York City,” he argued.  Luciano stated that the return of power to regulate the rent in the city would help to ease the increasing rent in communities like East Harlem.

The 8th City Council district is an area that is split between the boroughs of Manhattan and the Bronx and a mosaic of communities, consisting of East Harlem, Manhattan Valley, and parts of Mott Haven.  These neighborhoods in the district are diverse in racial, class, and economic composition.  Although the community is affectionately known as “El Barrio” by its long-time residents of Puerto Rican descent, the area has become home to a new growing immigrant populace primarily from Mexico.  The current elected representative of this district, Philip Reed who has served as the area’s councilman for eight years, will not be running for re-election due to the city’s term limit mandate.  In an earlier article published July 29th on Gothamgazette.com, Councilman Reed had some advice to whoever is elected his successor.  “Voters want to know that you’ll hard for them and be fair and straight forward,” the article quoted him. “The rest of it, they are very forgiving.”

Writer’s note: Since the forum was conducted in Spanish, this writer contacted the candidates to schedule a one-on-one interview to reiterate their statements for the purpose of this article.  Melissa Mark-Viverito, another candidate who attended the forum, was contacted numerous times to arrange an interview.  However representatives from her office did not respond in time for this story.

You can reach Leon Tulton at .(JavaScript must be enabled to view this email address)