By Jose B. Rivera

Many came up to an hour early to obtain choice seating.  And St. Cecilia’s Pastor Fr. James Brennan, C.Ss.R, never looked so excited.  Fr. Brennan waited outside the church for the Cardinal to arrive.  Cardinal O’Connor did arrive in a small common black car.  You’d expect the Cardinal to be surrounded by motorcycle cops, but no, he came only with his driver, who also served as his personal alter assistant.

Old Friends
Many parishioners, old, new, from near and far came to help celebrate this great anniversary.  This writer (an old St. Cecilia School Alumni) saw many former teachers and school mates.  It seemed that the past was exploding into the present.  It was a real thrill.  It’s almost as if former teachers were not real, were phantoms, and had now decided to rock the senses with a ghostly visit.  They were real after all!  You could see, touch and hug them all.  They still exist!  How great it was to see them!  My heroes of old, in the flesh.

Back to the Cardinal, he was very funny.  Cardinal O’Connor could have had a calling as a comedian.  He took every opportunity to crack a joke.  And they were funny side liners.  He was also comical when reading off some of St. Cecilia’s accomplishment and history to the crowd.  He would stop and say..’ It says here that… ” Not trying to convince the crowd that he knew it all.  Because plainly he did not.  So instead of faking it, he made it humorous.

St. Cecilia’s (much to Fr. Brennan’s credit) prepared extremely well for this event.  The church looked fantastic and the choir sounded like angels singing.  They dressed well too.

Due to the large crowd present, the balcony’s were opened to allow seating there.  It is not often that the balcony’s are opened at St. Cecilia’s.  This writer has not been on the balcony since 1966.  If you ever visit the church, it’s a great place to take pictures. 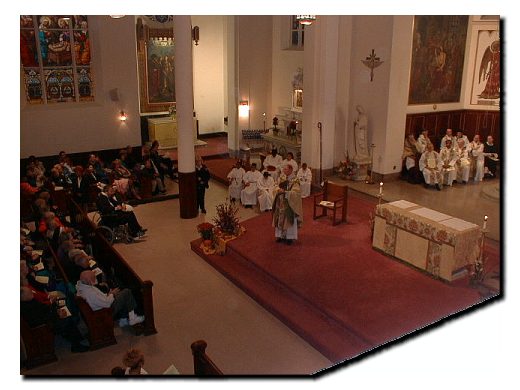 Picture of T-Shirts on sale at 212-534-1350, T-Shirts celebrate the 125th Anniversay of St. Cecilia’s ChurchThe mass did not last too long and there was a virtual feast (reception) after the mass.  It was a great event.  Never have this church looked so happy and excited.  It was a calm happiness.  And it was a great time.  Congratulations St. Cecilia’s on your 125th Anniversary!!.

Oh, there is still time to get into the celebration, St. Cecilia’s still has some celebration T-Shirts, and other items to sell.  Call the rectory at 212-534-7912 for further information.